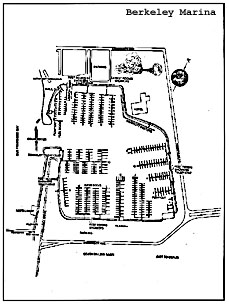 Maneuvering a large boat like Pegasus is tricky and requires the full concentration of the crew.  Hence you will be told to belay it.

As we go down the channel, we use the engine.  Ideally, this would leave no sheen on the water from the oil and other scum that collects in the bilge (part between keel and cabin floor inside the hull) and motor.  Typically, any use of boat engines causes some pollution, be it exhausts, leaking, noise or smells.

Since many of the current published estimates of San Francisco Bay Estuary pollution levels are based on 1980’s data , a vital part of the Pegasus Project is the gathering and analysis of recent data on the impact of recreational boating on the Bay estuary system.  As the growing Bay Area approaches the year 2000, it is important to introduce our entire community not only to the joys of boating and the intricacies of nature, but also to the conservation responsibilities this requires.

According to the Department of Motor Vehicles (DMV) and federal records, there are roughly 850,000 boats in California, 250,000 are registered in counties bordering on the San Francisco Bay Estuary.  Of these, around 2,000 are sailing vessels with auxiliary motors, such as Pegasus.  Today, unlike 20 years ago, most recreational sailing vessels similar to Pegasus are equipped with four-stroke diesel engines.  Over the years, research has shown that diesel engines burn cleaner than gasoline engines.  Due to their superior efficiency in burning fuel and smaller hydrocarbon content, diesel emissions are lower than emissions from comparable gasoline engines.

All fossil fuels (petroleum-derived gasoline and diesel, natural gas) and biomass-derived ethanol and methanol, are hydrocarbons.  Hydrocarbons can be gaseous, liquid or even solid (ash).  Hydrocarbons link chemically with oxides of nitrogen (NOx) in a complex chemical process including photoreactivity under sunlight to form smog.  When hydrocarbons link with sulfur oxides acid rain is formed.   Hydrocarbons are leaked into the water and air most often when boaters re-fuel, change boats’ oil, and via accidents.

Under the authority of the Clean Air Act of 1990, limits on exhaust emissions, imposed by the Federal Environmental Protection Agency (EPA) and California Air Resources Board (CARB) drive new technologies (Dempsey 1995). Even the relatively clean diesel engines emit hydrocarbons, especially at high speeds.   Innovations such as bio-diesel fuels produced from e.g. soy are reported to have a better smelling exhaust and cleaner running engine when added to the regular diesel.  As a renewable resource, bio-fuels do not deplete scarce natural fossil fuel resources, and these “for-fuel” plants actually consume the carbon dioxide in photosynthesis (the process in which plants convert sun, carbon dioxide, water, and nutrients from the soil to produce sugar and oxygen) that is produced in the combustion.  (Mele, 1993)  The 1972 Clean Water Act summarizes the national policy goal with regard to water quality as follows:   “restore and maintain the chemical, physical, and biological integrity of the nation’s waters…it is the national law that the discharge of pollutants into navigable waters be eliminated…it is the national policy that the discharge of toxic pollutants in toxic amounts be prohibited.”  Advances in cleaner burning diesel applications are improving.  (Dempsey, 1995)

Results from the on-going Green Boat Project suggest that with a high leak rate (1%) 2,180 liters/yr. and low leak rate (.01%) 218 liters/yr. of oil are leaked into the Bay by recreational diesel auxillary sailing vessels. The estimates given in the Pegasus Project’s Green Boat Report attempt to realistically assess the environmental impacts sailing has on our local environment.   We continue our research to assess all vessel types in the Bay for oil leakage estimates.

Here are some webpages that provide information and more links to sites about boating and marine pollution of the SF Bay:

View this online at: https://nautilus.org/pegasus/leaving-the-dock/