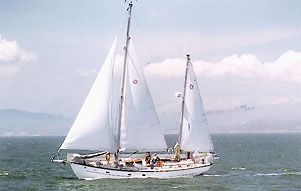 Pegasus, named after the winged horse of Greek mythology, was built in Maine after a design by John Alden & Co. in 1972.  She is 51 feet long overall, built of Philippine mahogany and sleeps 7 people comfortably.  She is equipped with hot and cold water, a galley (kitchen) and a head (toilet).

Throughout this website you will find useful information for your voyage on Pegasus.  This curriculum resource is composed of both theoretical explanations of nautical terms and procedures, as well as background information that might be useful for pre-trip class work.  It also deals with the safety concerns arising from braving the waters of the Bay. In addition to its well-known features and sights, the Bay is also part of a powerful natural environment that requires care and preparation in enjoying it.

We proceed in the chronological order of the voyage, as it unfolds from the departure at the Berkeley Marina, through various stages on the water.  Once underway, the passengers can experience different aspects of the sailing voyage at a number of stations on the deck of Pegasus.

Generally, we will leave from the Berkeley Marina, head northwest toward Angel Island, and zigzag back and forth into the (usually) westerly wind, but staying clear of the Berkeley Pier.

If you require any further information or would like to confirm the program for your voyage, please contact us at  (510) 204-9296.

Also, Pegasus captains and crew are available to brief parents and teachers on safety and other issues.  A video is also being prepared on these matters and can be borrowed from the Shorebird Nature Center as soon as it is completed.  Contact the SNC at (510) 644-8623. 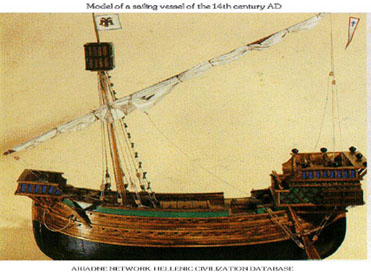 Sailing has been a means of transport for thousands of years.  No one knows for certain who the first voyagers were.  In Western mythology it is thought that the Phoenicians, a people living on the eastern shores of the Mediterranean Sea, were the first to cover large distances with sail-powered canoes, 5,000 years ago.  There is evidence that Polynesians in the Pacific traveled thousands of miles in wooden, twin-hulled sail-powered crafts, long before Europeans came along to “discover” the Pacific.  Until about 170 years ago, all seagoing vessels were built of wood and used canvas or flax material for sails, in a design that basically has not changed over the millennia.

Today, huge quantities of goods and materials are transported around the world on massive ships made of steel.  Until recently, ships were also the main mode of transport for people wishing to cross the oceans; scheduled airplanes only started crossing the Atlantic in the 1950s. Pegasus is a reminder of a time when travel took place at the leisurely speed of roughly 10 knots (knot here means “one nautical mile per hour”), or 11.5 mph.  In comparison, most people can run this fast.  Today, wooden vessels in the San Francisco Bay are primarily limited to pleasure craft, although the occasional wooden tug or fishing boat can be seen. The Sahara, a vast sand desert in northern Africa, used to be a lush forest region until the Romans logged the trees for the construction of the formidable fleets that helped them build their empire.  Similarly, the fleets of the Japanese and other seafaring Asian nations have forever changed the face of some Pacific Islands.  This serves as an illustration of why wooden vessels are no longer an ecologically sound mode of transport!

Long before the arrival of Europeans in the Bay Area, local tribes harvested the rich sea life of the Bay for food.  They used dugouts (boats made by hollowing out large logs) and other small craft to harvest the sea life near the shore.  This, and the indigenous plants and game animals, provided the basis for a self-sufficient way of life.  For thousands of years before the arrival of the Spanish and Portuguese explorers, over 10,000 indigenous people, later to be called the Oholone (a Miwok Indian word meaning “western people”), lived in the coastal area between Point Sur and the San Francisco Bay.  Interestingly, based on oral history (which is now largely lost as a result of the huge reduction of the California Indian population following European contact and exploration), it appears that Alcatraz was used as a place of isolation or ostracism for tribal members who had violated a tribal law or taboo; as a camping spot; an area for gathering foods, especially bird eggs and sea-life; and also as a hiding place for many Indians attempting to escape from the California Mission system.

There is still dispute as to whether “discovery” of the San Francisco Bay is more appropriately attributed to Sir Francis Drake, who sailed into or by it on the Golden Hinde  in 1579 or to Juan Manuel de Ayala, who started systematically mapping it in 1775.  But the Bay quickly became a center of commerce.  Because of the natural harbor of the Bay, it is not surprising that it became a center for the construction and repair of vessels:  from the scows that carried hay and other goods to the villages around the greater Bay area to the clipper ships that brought goods from all over the world.  But it was the great gold rush of 1849 that put San Francisco on the map and changed forever the character of the Bay, both geographically and ecologically.  Such were the excesses caused by the lust for gold, that entire ships carrying prospectors were abandoned by their officers and crew and left to rot and sink along the waterfront of San Francisco and, to a lesser extent, Oakland.  These ships became the original landfill that has substantially reduced the Bay’s size, together with drainage projects etc.

Below is a webpage that provide information and more links to sites about boating safety:

Links to sailing history and the San Francisco Bay in general

View this online at: https://nautilus.org/pegasus/begin-your-virtual-voyage/