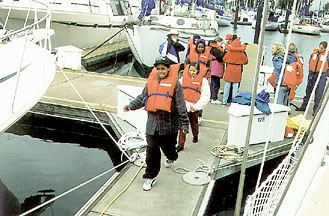 The moment you step onto K dock where Pegasus is berthed at K 128, you are walking on water.

Docks require a different sort of care than walking on ordinary roads. They are almost always slippery; there are ropes to trip over, and docks have a nasty habit of suddenly ending in water.  You will also find yourself in very close contact with rather large boats, with bows protruding over the dock.

The captain on the day of your voyage will give you a thorough safety briefing and designate seating arrangements on the deck and crew positions. Here, Captain Bill Proctor gives the safety talk. 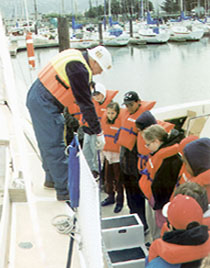 The basic safety rules to keep in mind are:

Pegasus is a zero tolerance vessel: No alcohol and no illegal substances are allowed on board.  No weapons of any kind are allowed on Pegasus: the only knives permitted are those for culinary or sailing purposes.

The captain is in charge, both legally and practically.  Following these rules and doing what the captain, usually relayed through a crew member, says, is the main insurance that you will be safe during the voyage.  Should a person go overboard, we will turn around and pick him or her up without fail. Alert the crew immediately if you see any danger of collision, unusual behavior, strange odors, malfunctioning or broken equipment, loose ropes, shallow depth, any injury or nausea, or abrupt changes in weather or sea conditions.

Apart from state of the art safety equipment and extensive crew training in how to use it under real circumstances, sailing on a boat as big as Pegasus is inherently safe:  She has a 10,000 pound lead keel which puts her center of gravity so low that it is impossible even for strong Bay winds and waves to capsize her.

As the crew prepares the boat for leaving, you will be told to belay it, that is, to be quiet, to allow the crew to communicate a series of complex tasks along the length of the boat.  A more current sense of the term to belay is actually “to coil as running rope around a cleat so as to fasten or secure it”.  However, the convenient way of ensuring a quiet and collected mood during the complex departure procedure is documented in the Oxford English Dictionary as follows:

As the notes on belaying it show, a separate language has developed on the boats of English speaking navies over the centuries.  As the term “helmsman” suggests, sailing the oceans used to be a man’s world.  The role of women was limited to providing the names for boats, which are traditionally “female”.  Recent research has challenged this stereotype by showing that the “masculine” domain at sea on sailing ships was always interdependent with the “feminine” domain on shore in the family and home economy.  Moreover, many women were captains and even commanded pirate ships. (Margaret Creighton, Lisa Norling. Iron Men, Wooden Women: Gender and Seafaring in the Atlantic World, 1700-1920. John Hopkins University Press, 1996.)

Similarly, an important dimension of sailing history is the role of African American and American Indians sailors for whom the ship was the only place where they were in command of white males during the era of slavery in American history.  People of color also played an important role in the development of the waterfront in the Bay Area, although little scholarly research has been done on this subject to date.

With the diminishing role of ships as a mode of transport for goods, and the ascent of sport sailing, there is now a need to update the sailing vocabulary.  For example, on Pegasus we use the term “helm” which is gender neutral rather than the traditional “helmsman.”  However, there are still fewer highly experienced women sailors than men although in the Bay Area, more women are entering sailing schools than men in recent years. Nonetheless, many male sailors exhibit prejudices about women’s ability, skill and strength, lack of access and in particular, male communication styles on boats!

Many women are frustrated by the tendency of male crew to grab lines out of their hands or to simply take over a position, something that they would never do if the person was a man.  On Pegasus, we strive to ensure that the crew is gender-balanced to provide strong role models to the youth sailing with us, and that all crew find the style and training to be supportive rather than alienating.

Below are some of the most frequently used terms and commands aboard Pegasus.  If you don’t understand something being said on board, simply ask for it to be repeated in plain English!

System for pointing out direction in relation to Pegasus 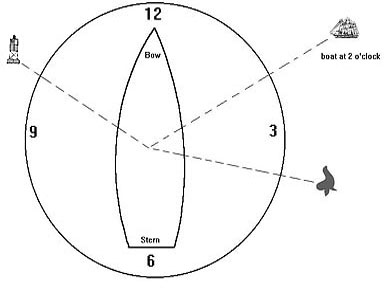 An easy way of referring to dangerous objects in the water or interesting sea life is to picture the bow of the boat to be pointing at 12 o’clock on an analog clock face.  The direction of objects can then be identified by the “hour” this would constitute on the clock.  For example, the smaller boat in the picture below would be at “2 o’clock”, the seal would be at about “4 o’clock”, and the buoy would be at “10 o’clock”.

View this online at: https://nautilus.org/pegasus/at-the-dock/