On August 20th, 2003, Pakistan’s preeminent pro-democracy and anti-nuclear advocates, Dr. Pervez Hoodbhoy and Dr. Zia Mian will examine the success and failure of US foreign policy in achieving its avowed goals. The Nautilus Institute is hosting this event which will focus on, first, the prospects of democracy in the Muslim world and, second, the future of nuclear proliferation.

Given the pressures that could lead to armed conflict between the United States and the DPRK in the near future,  Peter Hayes, Executive Director of the Nautilus Institute, outlines four scenarios that try to answer whether or not possibilities exist for a peaceful resolution between the United States and the DPRK before November, 2004. This essay was based on a PDF from the second annual Nautilus Institute US-DPRK Scenarios Workshop held in May 2003.

The Nautilus Institute is seeking applicants for its inaugural Global Fellows Program. We are inviting applications from organizations and individuals for a six week training program in “Tools for Global Problem Solving.” Our focus will be on strategic uses of information technology, scenarios methodology, freedom of information act, and information/communication/news services. 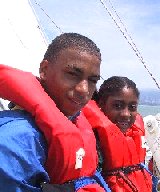 An overnight voyage to Angel Island’s Ayala Cove tested skills that a group of youth from the Berkeley Boosters acquired through a series of summer sails aboard Pegasus. All of the sailors had been aboard Pegasus for preparatory day sails to learn skills such as knot tying, raising and lowering sails, steering and navigation. Under the guidance of Pegasus volunteer crew Paul Kassatkin, Jim Gaebe, and Nancy Navarro, the youth enjoyed an exciting sail to Ayala Cove where they cooked, cleaned, ate and slept aboard the moored vessel.

View this online at: https://nautilus.org/napsnet/napsnet-daily-report/daily-report-15-august-2003/